Now, Matari loves to sing and ride his scooter... 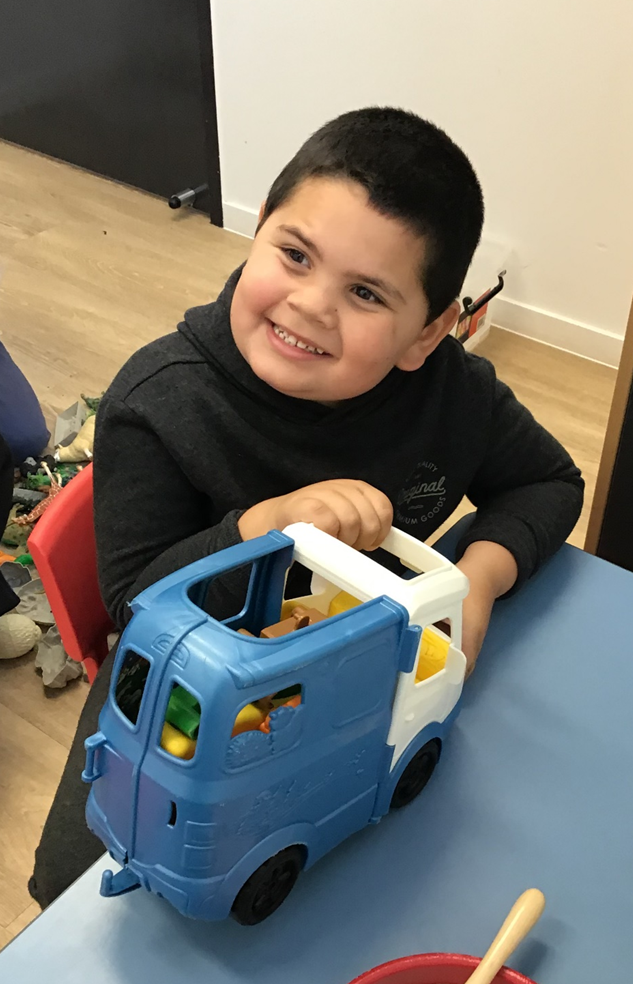 When Matari was still very little, I noticed there was something a bit different to his development compared to my other children. He was not responding to his name and he wasn’t saying anything apart from what he saw on TV. He wasn’t really talking much at all and he’d stopped doing things that he had been doing, such as clapping and waving goodbye. He would line up any toy he was playing with and it didn’t matter what it was. He was quiet, didn’t sleep much and he wasn’t interested in other kids.

We took him to the doctor who referred us to the ‘Mums and Bubs’ Aboriginal and Torres Strait Islander Community Health Service (ATSICHS) at Logan where a speech therapist, occupational therapist and paediatrician were all under one roof. Being able to go to an indigenous clinic was great because they understood where we were coming from.

I was very emotional and upset the day the paediatrician diagnosed Matari with autism. It wasn’t that I thought his life was over, but I was so sad to think that he was not going to be like the other kids. I didn’t know anything about autism and I even asked the doctor if I needed to take him out of day care. I started doing a lot of reading about autism.

The clinic had an autism support group and we went along to that. It was one of the mums who came to this group who told me more about AEIOU; she had an older child attend. At that time, there was an AEIOU centre being built at Logan so when it opened it seemed to work out just perfectly for us. Though, if it wasn’t for the other mum who told me about it, I probably would never have found it. My advice to other parents would be to find a support group. It is always good to talk to other parents that are going through or have been through the same thing as you.

It was August 2018 when Matari started with AEIOU. He was three. At his first AEIOU assessment, the staff asked a lot of questions and watched him play. I felt very comfortable and it was easy to talk to them. I liked that they could watch him and get an idea of where he was at, so it wasn’t just about what I was saying. We talked about what Matari’s goals would be and the team really listened to what I hoped for Matari to achieve.

I was nervous about Matari going to AEIOU full-time - he was only going two days a week to day care. But I had nothing to worry about. He transitioned well and didn’t get upset. All it took was one day, and he was happy to go back the next. He’s been going five days ever since.

Now, Matari can say more words. He says just one word, or a couple of phrases, to communicate what he wants. We can usually understand him and he’s much less frustrated now than when we first started. He’s also doing well with toilet training too. There was a time I thought he would never be out of nappies, and he used to have a bottle up until he was five. AEIOU has helped him learn and adapt to change. Some of the things that I thought were going to be difficult, were not.

Their occupational therapist has developed a sleep strategy for Matari which we have been following at home. It’s a board with pictures of dinner, pyjamas, bed, reading time and sleep with those words alongside them. We work through them every night and Matari has adjusted to those prompts well. He mainly sleeps through the night now: it’s been a big change for me!

Matari loves anything outdoors. He loves swings, slides, and the trampoline. His favourite thing to do is ride on the scooter and he’s good at it too! He’s still not too interested in the other kids; he’s only just started playing with his older siblings in the last year which has been great progress.

One of the best things about Matari is the way he can sing songs and how happy it makes him. He starts to sing as soon as he wakes up. And, he’ll sing anything he might have been watching, or what he hears on the radio. His memory is amazing, he seems to pick the song words up immediately.

His favourite song right now is “I love my teddy bear”.

Next year, Matari will go to Logan Special School. It will be another change and there will be new things to learn so the AEIOU team and I will talk about how to transition him. It might not be easy, but we can do it.

My message to parents is don’t be afraid to speak up for your child, you are their voice and know what’s best for them!