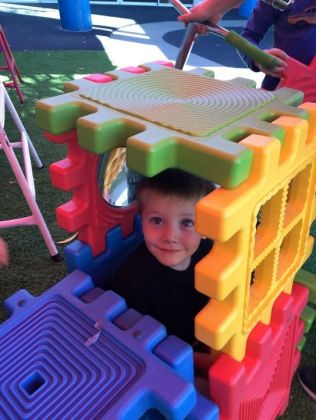 Mason turned five in April and he’s going to Big School next year. The future is looking bright! Mason’s mum, Jade, offers a glimpse into their journey.

We knew something wasn’t right when Mason was six months. He wouldn’t cry and he used to lay on the floor and just stare at the fan. He wouldn’t play or make eye contact and he wasn’t engaging with us. He never felt ‘present’.

It was my Mum who first suggested we see our family GP, who had been our doctor since I was young, and who then referred Mason to a paediatrician.

At that time, the paediatrician had said everything was fine and I thought: well, if we’ve been told by a specialist that he’s okay, he must be. Six months later we returned to our family GP who referred us to another paediatrician. It was quite disheartening to have been dismissed by the first.

Mason was two when he received a diagnosis of autism.

We were shocked and saddened to know there was something different about Mason. But, at the same time, it was a relief. He was so frustrated and we didn’t know how to help him, because we didn’t know what was wrong. We didn’t ever care what Mason’s diagnosis was we just wanted to help him be the best version of himself that he could be.

When we started doing individual therapy with Mason, a disability service advisor mentioned AEIOU to us. We thought it sounded like a good place for him so we made a phone call to AEIOU in December 2017. We were lucky they had a place available and he started the following January.

When Mason first started at AEIOU he could only say 10 words and he was constantly having meltdowns - sometimes for up to four hours.

He was aggressive, throwing things, overstimulated and frustrated all the time. He couldn’t get across what he needed and so he lashed out. He was struggling with eating and he had sensory processing issues. His assessment indicated his speech ability was that of an eight month baby. Now, his assessment indicates he is hitting the milestones of a child his age.

The team at AEIOU started to work on was his behaviour first - it was a priority because he was harming himself. Within two weeks his meltdowns had halved. And, he was toilet trained in the centre in just two days. The strategies they put in place to help calm him were effective and we felt he was where he needed to be: in a controlled environment where there was understanding, help and the team knew what to do. It helped at home too. It’s been lifechanging.

One of the hardest things has been not being able to enjoy family outings.

Mason used to run away. He’d just take off and we’d spend the whole time chasing him, and scared for his safety. And, it was scary for us to not know if he’d ever be able to make friends because he didn’t bond well or talk to other children. We wondered: will he make friends?

Now he’s making and sustaining friendships and has a good little group of friends. About 18 months ago we took Mason to a birthday party, before he would have run around like a headless chook. But it was different now. Here he was sitting down and wanting to play parcel-the-parcel, hold hands with the other children, and be part of it. It was amazing.

There were some dark times and sometimes it didn’t feel like there was a light at the end of the tunnel.

We feel that autism is a journey and the best results come from a team of people, both professional and family, who are willing to learn and be educated on how to best help and support each child. We have been very lucky to have found this in the Gold Coast AEIOU centre and through our amazing family who have been there from the start and willing to do whatever it takes.

I’m excited for Mason, he is such a smart incredible little boy and he’s got a bright future ahead of him.