“Autism had built a fence around our Emma, and we just had to unlock it" - The Foster Family 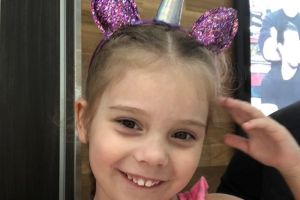 Receiving Emma’s autism diagnosis provided much-needed validation for us. That it wasn’t just me doing a terrible job at parenting. Our family been struggling for some time and were doing everything on our own without outside support. While part of me didn’t want to label her, another part of me knew the diagnosis would open up doors to get help. Now, through AEIOU, we are the success story I never dreamed would happen.

Emma was always very physically advanced, but it was as though her mind hadn’t caught up with her body. She didn’t speak like the other toddlers, she bit my husband and I almost on a daily basis and I envisaged needing to change her nappy as a 10 year old. I didn’t know what was going to happen to her when she grew up. Would she live with us forever? Would she ever have a job? I feared us dying because who else could look after her? Before AEIOU we grieved for the future we had imagined for our first child.

At first, the biggest difficulty for Emma when starting at AEIOU was settling into a new routine and having expectations set for her. She was being challenged for the first time. We knew all this personality and intelligence was inside her, but we hadn’t been able to break through on our own. Because she couldn’t communicate with us, there was so much frustration working against us as a barrier.

Now she is like a different girl. Her personality just shines. She’s goofy, silly, plays and pretends. So many things you’d expect of a child her age. She can talk and tell us when she’s angry, rather than kicking and biting. I feel like the mum of every other four-year-old who never stops chattering. I try to remember back to the time I wished she would talk. The transformation almost seems like magic.

Emma is teaching herself to read. She knows all the colours and letters of the alphabet. She is also toilet trained, something that, with the right support, she picked up almost straight away. Her diet is still a work in progress and our biggest ongoing challenge, but compared to where we were, it’s not as high of a mountain to climb anymore. And the staff are there to support us all the way.

I’m just so grateful that now I can dream about Emma’s future again. What’s she going to do, what she’s going to be. I thought I’d lost that. I can’t see anything out of reach for her now. She loves sea animals so maybe she’ll want to be a marine biologist. All our lives have just changed 100 per cent.

If I could reach out to other families in the same boat as us a few years ago, I would encourage them not to shut the doors. There’s help out there and people who want to work with our kids. We also need to hold our kids in the highest regard, because they’re just capable of so much.