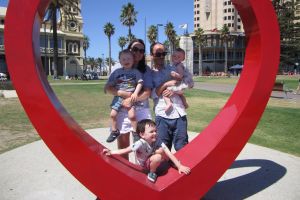 Jasper was our first child so we really had no gauge of what normal behaviour was. It wasn’t until our middle child was born that we knew that we had to seek help. Jasper was so upset whenever his baby brother cried, he would scream so loud and try to hit him. We couldn’t leave them alone together as it was too dangerous. Others called it normal sibling jealousy and toddler behaviour, but we knew it was something more.

Jasper was always a horrendous sleeper, so serious and never smiled. I would play with him for hours each day, trying to interact and teach him things, but we never got anything back. Eventually I ended up suffering severe post-natal depression and honestly thought I was the terrible mum and my son deserved better.

When we first heard the words from a child psychologist suggesting we test for autism, it left us with mixed emotions.  His father was completely gutted, with the future he had seen for him vanish in a blink of an eye. I was surprised at first but when the correlation between the behaviours was explained, it made perfect sense. Once Jasper was assessed, I honestly felt relief. We finally had a name for his behaviour, although we didn’t know too much about autism. Now we could create a plan to help our son.

Jasper was three when he started at AEIOU in Adelaide. The staff were so warm and inviting and understanding. They put us at ease instantly. We really didn’t know what to expect and we hadn’t met many children with ASD, but they explained things so well and answered all our questions. We felt AEIOU was definitely the best place for Jasper.

We saw results almost immediately. Jasper’s speech improved tenfold, along with his behavior. He even became toilet trained in just three days! He stopped falling over everything and his gross motor skills improved. His confidence soared. But perhaps most importantly, Jasper learned to accept his young brother and show him kindness and love.

Because Jasper was more settled, calm and happy, things became far easier at home. We could leave him with his brother for longer periods knowing he wouldn’t hurt him. Then they started playing together. Finally, we could go on family outings together. We were much less stressed as parents, and in turn, a lot more fun. We could almost have a normal life.

Jasper is such a confident boy now, it’s really hard to imagine how he would be if we didn’t have him at AEIOU. He is attending kindergarten now and doing a fantastic job. He will be going to a mainstream school in the coming year.

The world truly is Jasper’s oyster! As parents, we just plan to give him as many experiences and opportunities as possible and see what comes from them. Hopefully he will find something he truly loves doing that we can help nurture.

The children at AEIOU Sippy Downs were ECSTATIC when the team from Vuly...

“This is something that was only a dream before starting at AEIOU”: Blair's...

Before starting at AEIOU in August last year, Blair's family believed that...