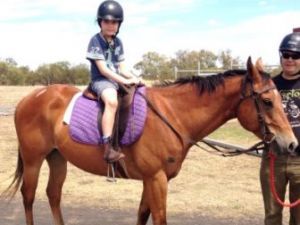 This year, the AEIOU Foundation is celebrating a 'Decade of Difference' - ten years of making a difference to the lives of children with autism through our early intervention program.  Saxon Holman is one of these children ...

Our son Saxon Holman is 10 years old and is such a wonderful, caring, funny and affectionate boy. He is such a joy now, so very different from the boy we enrolled at AEIOU six years ago.  Back then our little Saxon was a scared, non-verbal, sometimes violent little boy who would regularly scream and have meltdowns. He couldn’t control his emotions, couldn’t engage, couldn’t make eye contact and ran away the second we had our backs turned. .

Now, Saxon is in a mainstream Year 5 classroom, performs in a choir at Eisteddfods, swims and rides horses on our farm, can eat out at restaurants, go to the cinema and play independently with same age peers.

"I said to Sax recently, “I’m so pleased that you look me in the eyes now when you are talking with me” and Saxon looked at me and said,
“Yes, it’s good isn’t it.”

Our goal has always been to help Saxon have the best life possible and at 3 years old with no speech and severe sensory and behavioural issues, we started our work towards that goal.

In 2008, aged three, Saxon had speech therapy and attended an Early Childhood Development Unit.  At that stage, he didn’t like certain smells or crunchy foods, bit everything, only liked to wear tight clothing and covered his ears when he was anxious or things were too loud.

In 2009, aged four, he attended a C&K kindergarten with an aide but was still not engaging or playing appropriately or talking, so we had a psychologist observe him at kindy. The psychologist’s advice to us was that Saxon had autism and he’d never love or communicate with us in the way other children did.

I think any parent would find that devastating but we refused to believe there was no hope, and after a formal diagnosis of autism from our Paediatrician we enrolled Saxon at AEIOU Park Ridge (now Camira).

When Saxon began at AEIOU in April 2009 he was 41/2 years old. At this stage Saxon could not make eye contact with us, wasn’t toilet trained, regularly took his clothes off, couldn’t sit still, regularly ran away, couldn’t control his emotions, pinched others, didn’t talk and ate only 4 foods.  What he could communicate to us through his actions was that he loved vibrations from train floors and his Dad’s motorbike tank.

Now, we know what Saxon loves as he tells us!  He loves us (his Mum and Dad), his sister Lily, going to school and listening to music.  Saxon is now completely verbal and no longer uses PECs.  He can read fluently and with expression and has very solid self-attendance and organisation skills.

In June 2009, after just two months at AEIOU, Sax was saying a few words, going to the toilet, using a picture schedule at home and school and settling into the new routine. By September 2009 our family noticed Saxon was improving. He was speaking small sentences, giving cuddles, waving and seemed happier.

Settling in to AEIOU was hard but the staff were wonderful and helped us learn how to carry on his important learning at home. We read a lot about autism, particularly from Temple Grandin’s perspective, who said; “Every behaviour is a communication”.  That has been our mantra.

Saxon had improved so much after just 14 months at AEIOU that we decided to move to country Dalby in mid-2010 when Saxon was 5 ½.  Dalby offered our family and Saxon the opportunity of living on a large property with a nearby school able to support his needs, as well as our elder daughter’s schooling. Our last day at AEIOU in June 2010 was very emotional. We were so proud of Sax yet so sad to say good bye to our autism family and friends. We could all understand what each other were going through and we were supporting each other through the setbacks and celebrating the wins. 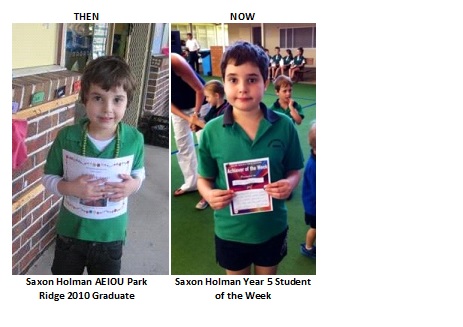 When Saxon began at his new school in July 2010 his teacher from AEIOU Park Ridge visited Dalby to assist with his transition into his new school and we haven’t looked back! He had learnt so much at AEIOU and was having success with  coping, routines, turn taking and communicating.  He had been given the foundations for learning at AEIOU which he would continue at Dalby South State School.

Initially he was in the Special Ed Unit full-time, then part-time combined with part-time mainstream lessons.

At the end of 2014 Saxon was re-diagnosed with high-functioning autism and we advocated for his move full-time to a mainstream class-room. This year, in mainstream Year 5, he has an aide if he needs it and has buddies in his class to help. He has individual Maths, Gross Motor, Social Interaction and English Lessons with SEP teachers throughout his week and he loves the independence.

Saxon thinks in pictures and has an outstanding memory for images, numbers and technology. The skills Saxon gained at AEIOU in maintaining focus and attending to tasks through to completion, turn taking and sharing are now often better than that of neuro-typical children in the mainstream setting of the same age.

When Saxon was about five we told him he has autism like some of his other friends.  He used to call autism ‘awesome’.

"Now Saxon says, “I have autism and I’m awesome.”

As parents we feel we’ve reached our goal and it’s onwards and upwards from here. Saxon has surpassed all our expectations and his family, friends and teachers are all so proud of his growth and eagerness to learn. We believe sending him to AEIOU with their specialised program set us up for success.  AEIOU showed us the way, especially in the beginning when we were just learning about autism and, coupled with our hard work and perseverance at home, Saxon has shone. Thank you AEIOU for guiding our son and helping him to talk, play, learn, sit, make eye contact and communicate with peers.  Thank you for trying to understand his needs and for supporting us. Early intervention is the only chance for children like Saxon and AEIOU provide a wonderful program that gets results.

By Trinette and Nick Holman 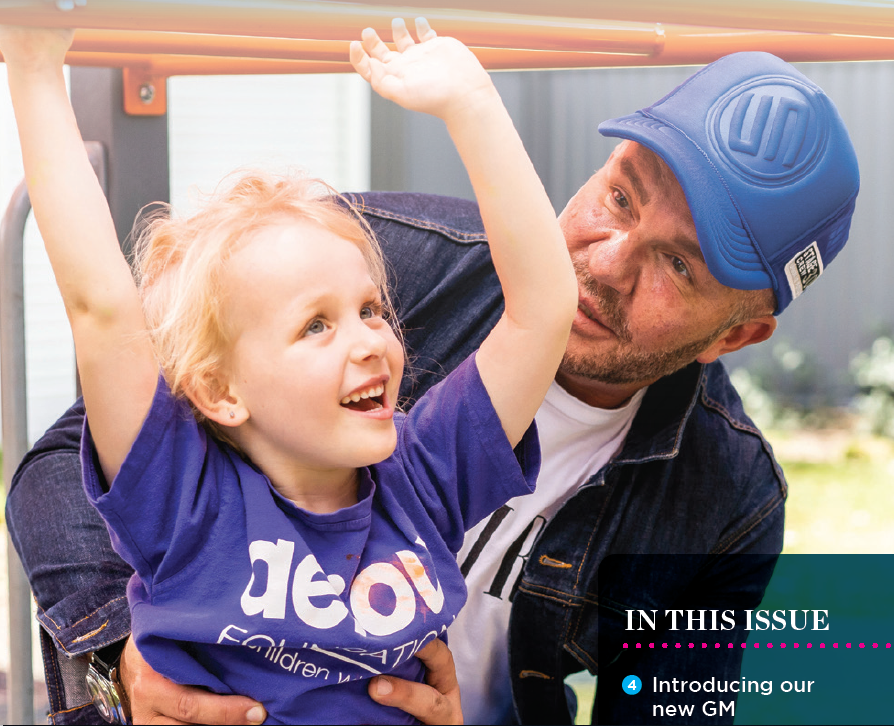 "It all started with a little newspaper clipping" - The...