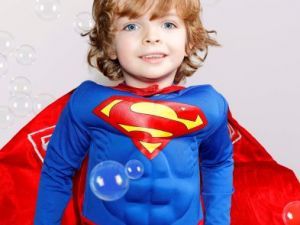 This year, the AEIOU Foundation is celebrating a 'Decade of Difference' - ten years of making a difference to the lives of children with autism through our early intervention program.  Ben Butcher is one of these children ...

Back in 2010 when our son Ben was assessed for autism he did not have the classic traits of autism or of a child with severe autism.  At 2 ½ Ben did not have any speech and did not interact or show an interest in other people.  His non-verbal communication was also very limited and he wasn’t interested in imaginative play.

The child-care centre Ben was enrolled in had also noticed these red flags.  We started with some speech therapy for Ben and when he was assessed for autism, under a now superseded diagnostic model, he was given a diagnosis of Pervasive Development Disorder – Not otherwise specified (PDD-NOS).

Once we had a diagnosis, we knew Ben needed help but we just weren’t sure exactly what limitations and capabilities Ben had at that stage or would have in the future.

As both my husband and I are scientists, we researched what limited information there was available about evidence-based treatment therapies.  All the research indicated that at least 20 hours of therapy was optimal.  AEIOU was the only provider we could find that delivered this and was available in an intensive program, which was also the best fit for our working lives.

We were able to continue working and earning an income with the peace of mind that Ben was receiving the best possible care, education and therapy for him. Coming from scientific backgrounds, the fact the AEIOU program was evidence-based gave us confidence it would result in an improvement in Ben’s condition. We were concerned initially that a full-time placement was going to be too much for our young son but after a week our minds were at ease.

We could see a difference in Ben within the first couple of days of him starting at AEIOU Park Ridge, just before he turned three.  He started to interact with people more.  He had basic sign language before he started and he then built on that with PECs and verbal cues.  Overall, his communication increased non-verbally at first and then verbally.

The AEIOU program also really helped Ben with social and sensory issues.  We fully committed to supporting Ben’s therapy as much as possible and we really worked in strong collaboration with the AEIOU staff who gave us amazing support.  We also really benefitted from establishing a network of support amongst the parents at the centre.

"The centre staff gave us the knowledge to support and replicate the strategies at home.  We had a strong relationship of mutual trust and were able to provide a consistency for Ben between home and the centre."

Ben was at AEIOU for three full years and then was able to transition to a mainstream school.  We were so excited Ben was able to go to mainstream but nervous as all hell at the same time. We just weren’t sure how he would go in the new environment with new peers and teachers.  AEIOU helped ease the transition and we developed the same level of collaboration and partnership with Ben’s new school as we did at AEIOU. Consequently, the school are quite aware of Ben’s needs and have worked on programs to help keep him in the class-room.  He has a quiet, sensory space off to the side of the class-room for time-out if he is seeking it as well as consistent goals between home and school, reinforced by rewards charts.

We probably didn’t recognise fully just how beneficial AEIOU had been for Ben until he started at Prep.  AEIOU had transformed Ben from a three year old who was non-verbal and non-interactive to a Prep child who was school ready in terms of his focus on tasks, attentiveness, transitions from one task to another and pre-academic skills of basic literacy and maths.  As Ben was so academically ready for Prep we didn’t have to worry about whether he was keeping up we were able to focus on Ben feeling comfortable socially and emotionally and settling in to the school environment.  This gave Ben the best chance possible at school as transitioning to a much more structured school environment hasn’t been without its ups and downs.

The Developmental Paediatrician that sees Ben re-diagnosed him with autism when the new diagnostic model, DSM-V, was introduced.  She has been absolutely amazed with the progress Ben has made since being at AEIOU and is extremely happy with how Ben is continuing to progress.

Ben is now seven and in Grade One.  His imagination is amazing now, his speech is still slightly delayed, his gross motor and fine motor skills are both really good - although he is still sometimes a bit of a ‘runner’!  He no longer has any speech or occupational therapy.  Ben is enjoying school, but coming back after school holidays can sometimes be a bit hard, however he is socially happy and enjoying life.  There are some days where noise and other sensory factors are too much for him but we have lots of strategies in place for him to manage that.  He really enjoys science, maths, reading and constructing things.

He loves fast movement like thrill rides at theme parks and is having a lot of success in a special needs trampolining class where he can do special tricks that older children have not yet mastered.  He also loves swimming and being underwater.  With his love of detailed construction, maths and fast movement my husband and I half-jokingly speculate that he may choose an engineering path in the future.

If Ben hadn’t learnt the skills he was taught at AEIOU, his life would be very different, he would be isolated by himself without communication skills and unable to attend mainstream schooling.

"Without AEIOU, there is no way we would have seen the same progress in Ben, the level of speech development or social interaction.  I honestly don’t think we would have got Ben to mainstream schooling if he didn’t go to AEIOU."

We wanted to give Ben the best start possible and we sent him to AEIOU with the belief that was what the AEIOU program would provide and now four years down the track we are certain it was the right decision.