The story behind the name: AEIOU 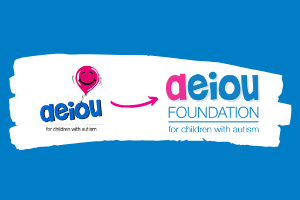 AEIOU stems from humble beginnings, back in 2005. Our very first centre was based in a character-filled old church in the Brisbane suburb of Moorooka. There were 12 children enrolled, and six therapists and educators to support them to reach their goals. But what is the tale behind the vowels ‘AEIOU’?

When James and Louise Morton’s son Andrew gained access to a pilot early intervention program, their world changed. However, when the pilot program was closed, never to be re-opened, the Mortons knew something had to be done to help their son and other children with autism reach their full potential. And so, out of this desire for a brighter future and with the support of Andrew’s therapist, AEIOU was born.

AEIOU’s core purpose was to help children with autism connect and communicate with the world around them. Guided by research into autism spectrum disorder and related theory and practice—as well as their son Andrew’s own experiences as part of the pilot program—founders James and Louise Morton could see hope for families of the ASD community in autism-specific early intervention. Originally the ‘Autism Early Intervention Outcomes Unit (AEIOU)’, AEIOU’s goal was to connect children with autism with life-changing, evidence-based early intervention to help them reach their full potential.

As we grew beyond our first AEIOU service in Moorooka and expanded our reach across Queensland, we strengthened our purpose and re-branded more intently to 'AEIOU Foundation for children with autism'.

There is synergy, too, in the way the vowels ‘AEIOU’ reflect the goals of our organisation’s core work: to help children with autism connect and communicate. The learning of vowels, alongside other letters in the modern English alphabet, is often a grounding step in expressing language and communication.

While our organisation is no longer known as the ‘Autism Early Intervention Outcomes Unit’, our service continues to provide access to evidence-based autism-specific early intervention. Across all our years in service, AEIOU remains committed to making a difference to the lives of families in the ASD community and to helping children with autism reach their full potential.