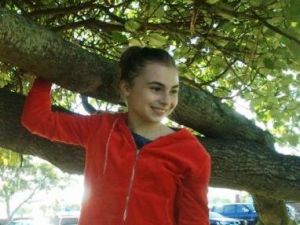 This year, the AEIOU Foundation is celebrating a 'Decade of Difference' - ten years of making a difference to the lives of children with autism through our early intervention program.  Sheridan Buckley is one of these children ...

Our daughter Sheridan was diagnosed with severe autism when she was three years old.  The Paediatrician said she was easy to diagnose because her autism was textbook and severe.  We had no idea how Sheridan would develop from there … would her autism remain severe?  Would it get worse? Could it improve and the impact of it on her life be minimised and managed?

I suspected from about 12 months of age that Sheridan may have autism.  Sheridan wouldn’t make any eye contact or gestures, and she had no non-verbal communication. She would make sounds, but they were for self-soothing rather than communication, and when she began to walk it was on her tip-toes.

When she was 15 months old she would categorise numbers by their shape, she wouldn’t play with toys in the way they were designed for play but would deconstruct them and sort all the like objects together in a line.  Sheridan didn’t like to have people in close proximity or people touching items she was using like pens or puzzle pieces; if they did she would have to start all over again if someone touched something she was using.  Sheridan was starting to talk but was mainly echolalic.  She also had sensory issues with tactile things and would love to stim with lights and have her eye-balls right up close to the TV screen.

We heard about the possibility of the AEIOU program starting from James and Louise Morton at a Mater Hospital event back in 2003, soon after Sheridan’s formal diagnosis.  I knew that this would be the best option for Sheridan and so we paid a deposit and waited until it was established.  In the meantime, we did 12 months of in-home therapy which was hugely expensive (about $50,000 p.a.) with multiple therapists coming in and out of the house five days of the week.  This meant that I also had to be housebound for the five days of the week that Sheridan was having in-home therapy.  The only other early intervention therapy option was a two morning a week program run by Autism Queensland that had a very long waiting list at that time so we were very pleased when we got word that AEIOU was going to start operating in 2005.

Sheridan was able to start at AEIOU in the first intake in February 2005 when she was almost four years old.  AEIOU were just amazing; it was fantastic to have a one-stop shop of speech therapy, occupational therapy and (at that stage) psychology all together in the one program. Sheridan’s language was really difficult and slow to develop as she had trouble regulating her breathing while verbalising; it was a struggle just to get a syllable out and could take up to 20 minutes to get a sentence out.  Sheridan’s speech therapist taught her how to breathe.  The OT and Psychologist also really helped with Sheridan’s focus and attendance skills.  This has continued to be a strength for Sheridan. It was such hard work for Sheridan but she was determined and now, 10 years later, has come such a long way.

"2005 was a really intense year for us.  We lived, breathed, ate, slept and talked autism."

It was our whole life and it was Sheridan’s whole life.  We received so much support from the teachers at AEIOU and it was great to get to know other parents with children at the same stage with autism and be able to rally around each other knowing that we could understand each other’s circumstances.

By 2006, with the foundation of a year of intensive intervention and the continuation of the intense multi-disciplinary therapy as a supportive back drop, Sheridan was able to attend AEIOU part-time and mainstream kindy part-time.  Sheridan flourished that year, and her language really came together.  She also became aware that year that she had autism, saying; “I’m not like the kids at kindy, I’m different, but I’m not exactly like the kids at AEIOU either.  So I told her, “Well you are like the kids at AEIOU, you all have autism and none of you are exactly the same as each other. You’re all different.” Sheridan had a bit of a tough time when she was five, because she wanted to be like all the other neuro-typical children in her class.  Thankfully by the time she was eight or nine she was more accepting of her differences to other people.

We transitioned Sheridan to a mainstream school for prep that supported lots of children with additional needs such as English as a second language, which was great for her as her language was still developing.

As Sheridan has grown up she has on the odd occasion experienced people being unkind saying things like, “You’re weird, you’re retarded”.  Sheridan’s response:  “No I’m just different, I don’t have an intellectual disability. I have autism which is a neurological condition.”

Sheridan’s friends really value her authenticity as she doesn’t try to be someone she is not or to be like everyone else, she doesn’t pretend to be any one other than who she is.

Now, Sheridan is in Grade 8 at a mainstream high school which is beautifully supportive of her.  Sheridan has learnt to live within society’s demands and the demands of school life, and if peopleare understanding of her quirks like the need to talk to herself in class or to move around at different intervals then she can manage very well.  As Sheridan has a verified condition, she gets longer to do exams and is allowed movement breaks in class time.  She’ll often sit on a fit-ball when she’s doing her homework so she can rock or have movement while she’s thinking. 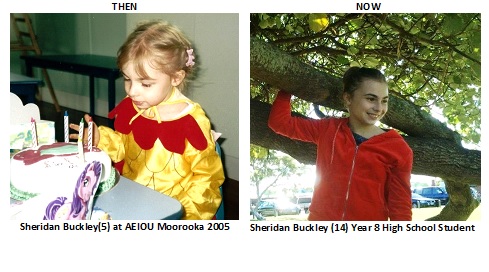 Sheridan does very well at English, is an excellent creative writer and is doing well academically.  Her attendance and focus skills are still very good, since her time at AEIOU, so she doesn’t get distracted in the class-room by any chat or social/ friendship issues.   She sometimes struggles with social and emotional issues and may have irrational worries around objects for example if I touch a pencil she’s using to do her homework, she might have to use a different pencil.  However we can rationalise with Sheridan now and say ‘this is something you don’t need to be stressed about, this is something you can overcome’ and she’s able to self-manage things so much better. Sheridan has a great mental strength and is so determined.  We’re so proud of her and all she’s achieved.

From a three year old with severe classic autism, Sheridan has emerged now 10 years later as a 13 year old, mainstream Year 8 High School student with high functioning ASD. The early intervention she received at AEIOU was an essential foundation for her.

"I honestly don’t know where Sheridan would be today without AEIOU."

Sheridan still has autism and always will, but she is living well with autism and it is only a small part of her life.