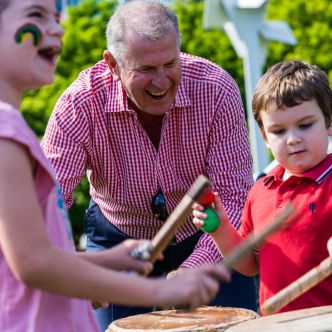 Pat Welsh is AEIOU Foundation's newest ambassador, joining the family in early 2018. He is Seven News royalty, having started with the network back in 1975, and is widely recognised as one of Australia's leading sports journalists and commentators.

Pat's first experience with AEIOU was attending our signature Take A Hike fundraising event in Brisbane in 2017, walking 5km with colleague Sharyn Ghidella. Pat later visited AEIOU's Nathan centre, spending time with the children and learning more about the program.  We certainly made an impression, because within months he was officially on deck, helping to launch the inaugural Let's Get Awesome for Autism family fun day at South Brisbane during Autism Awareness Month 2018!

Pat said he has friends whose lives have been touched by autism and he was impressed by the impact the program at AEIOU has on the lives of young children and their families.