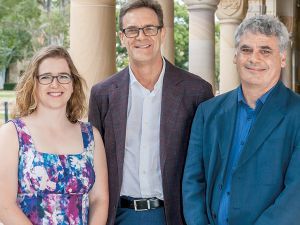 Recognising the significant contributions made by alumni in their local communities and beyond.

With a passion for philanthropy and social initiatives, Dr James Morton AM believes in working collaboratively to solve problems.

As a medical director of Haematology-Oncology Clinics of Australia and a senior specialist in leukaemia and bone marrow transplant services, part of Dr James Morton AM’s job is to deliver bad news.

But when his then two-year- old son Andrew was diagnosed with autism in 2001, Morton admits he was left shocked and confused.

He barely knew anything about the disorder but was determined to learn more and do what he could to help kids and their families cope.

“I think back to when I was doing paediatrics at university and autism would have been a paragraph in the textbooks. It just wasn’t a commonly made diagnosis then,” Morton said. Morton said there was a lot of information at the time of Andrew’s diagnosis that recommended high-quality early intervention for children with autism, but there was limited access to affordable programs.

“Andy went into the special education system, but it wasn’t autism-specific and we saw skills deteriorate in that setting so we thought that we had to do something about it,” he said.

Morton and his wife Louise worked to establish the AEIOU Foundation to provide effective early intervention treatment for children with autism spectrum disorder (ASD), with the first centre opening in 2005.

The AEIOU Foundation is now one of Australia’s largest providers of high-quality early intervention treatment
for children with ASD and has grown to 10 centres in Queensland and South Australia.

“The NDIS is mostly focusing on funding the costs of caring for disability. Actually getting them to invest in building abilities so you don’t have the long-term costs of disabilities is incredibly difficult.

“The school system is also very interesting around disability. The whole focus is on inclusion, rather than the quality of the education that the children receive.

“Andy was in inclusive education up to grade seven and he is now in a special school and he is thriving. It’s because he is hanging out with kids who are interested in the same things that he is.

“Government and decision makers are focused on inclusion as a right. But I actually think that the right for a person with a disability is to have the best pathway to a fulfilling life. For Andy, that pathway is through a special school.”

Morton has been known for his philanthropic work and social initiatives throughout his career, and was named as a Member of the Order of Australia in 2014 as well as Citizen of the Year at the Lord Mayor’s Australia Day Awards in 2011.

He became involved with the Leukaemia Foundation while working as a haematology registrar in the early 1990s at the Royal Brisbane and Women’s Hospital and was instrumental in creating The World’s Greatest Shave for a Cure initiative.

“Getting involved in that sort of thing is fun because you have to think creatively. The really fun thing is linking people and linking ideas.”

Morton is also turning his attention to an organisation he has helped develop called DayNation, with the idea of encouraging people to donate one day’s annual leave to assist in disaster relief.

Morton credits much of what he has achieved throughout his professional career to his university years and said he was honoured to receive a Vice-Chancellor’s Alumni Excellence Award.

“I have very fond memories and I’m very proud of being a UQ graduate,” he said.

“The University made us very good doctors.

“My brother and sisters are all graduates of UQ as well so it’s very much a part of our family.”