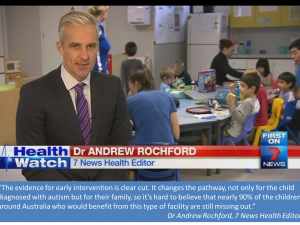 Two months ago the case of a 10-year-old boy being placed in a cage at a Canberra primary school to control his autism made world headlines.

The story drew condemnation from around the nation, but many parents in Australia do not get crucial support for their child at school because they live in the wrong state.

Lowrie's NRL career has taken him to clubs around Australia and New Zealand. The move to Brisbane was for Sonny, who was diagnosed with autism aged two.

Wife Sally talked to Seven News about when they first realised Sonny was different.

“I noticed he was non-verbal; he had no eye contact…lots of meltdowns in shopping centres,” she explained.

Autism is a lifelong developmental disorder that affects about 1 in 100 people.

It is described as a spectrum because there are many different aspects, behaviours, social interaction and communication to the disorder.  It is five-times more common in males.

Dr James Morton of the AEIOU Foundation said the medical profession is diagnosing more children on the autism spectrum.

Mounting evidence shows treating autistic children before they reach school-age can change their lives. The AEIOU Foundation is an intensive pre-school for kids between 2 and a half and 6-years-old, teaching them life-skills to cope in a school environment.

Dr Morton said: The evidence for early intervention is clear-cut. It changes the pathway for the child diagnosed with autism, as well as their family. So it's hard to believe that nearly 90 per cent of the children around Australia who would benefit from this kind of facility, are still missing out."

AEIOU is only available in Queensland and Adelaide.  Many families like the Lowries are uprooting their lives to move closer to these schools.

“It sort of breaks your heart now that seeing the success that Sonny's had that it's not available to every family and every parent,” Todd said.

After 1 year at AEIOU, Sonny caught up to his age in speech development. Sonny now attends mainstream school.

“He's loving his preschool or kindy as he calls it,” he said.

The National Disability Insurance Scheme will only fund the cost of long term disability, not early intervention.

To find out more about early intervention or to help fund AEIOU in your state visit their crowdfunding page.

More information can also be found on Twitter by following the #brickbybrick hashtag.