“Quite simply, AEIOU saved us. They gave us our son back.” – An open letter from the O’Dea Family 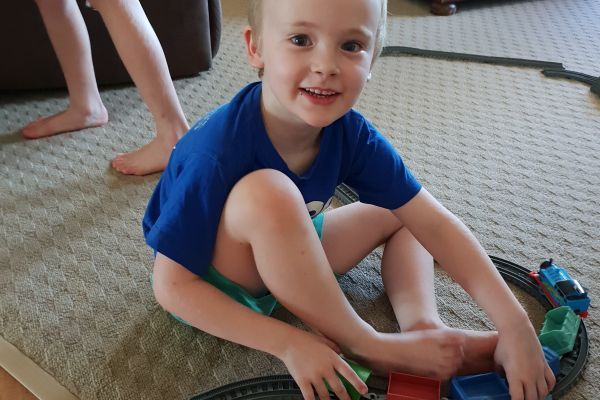 Jack is our third child of four. He is funny, joyful, charming, energetic and loves to cuddle.  But Jack was not always like this. In the early days he was doing normal baby things, just like our other children, except when it came to eating and talking. He was always hyperactive to the extreme, with no sense of danger, and had difficulty coping with any change.

By 18 months of age Jack had slowly slipped away from us.  He became separate from the rest of the family and could not speak.  He suffered through meltdowns, could not tolerate shoes and wearing most clothing. When Jack turned three we knew in our gut that things were not right.  We felt we had lost our child and decided to seek help.

We were living interstate at the time and could not get access to the support we needed. So we packed up and moved back to our original home of Toowoomba where we would have family and friends around us. We put Jack into speech and occupational therapy as soon as we were settled, but saw no improvement. It was difficult to watch and Jack’s struggle was painful.  He was assessed and misdiagnosed with a communication delay at around three and a half.

We were relieved, but in our hearts we knew it wasn’t right.  We changed day-care centres and received wonderful support from his teachers, and also continued with his therapies, seeing a slight improvement. It was at this time we heard our first word: GO.  However Jack was still struggling. The night terrors had taken over our lives and the meltdowns had Jack banging his head into walls and floors at an alarming rate. He couldn’t play with other children, including his siblings, and couldn’t cope if his mum and dad weren’t there. We felt locked out of our child. We couldn’t take Jack shopping or on any outing at all. We were at our lowest, worst and most desperate and more frightened than we had ever been.  We sought a second opinion on Jack’s fourth birthday and received a diagnosis of ASD Level 2.

It was the best and worst day of our lives.  Finally, we could access all the help available for Jack, but with that came the grief - the life you saw for your child on the day they are born was suddenly gone. It was replaced with the complete unknown of what his life would now look like.  We accessed the NDIS immediately and had the option of sending Jack to AEIOU Foundation.  It was a huge decision as we had just seen improvement in his therapies, and he was attending day-care and coping.  But his misdiagnosis had cost Jack time, so we made the scary decision to change everything Jack knew and send him to AEIOU Toowoomba.

Jack started his full-time early intervention in August 2017 and quite simply they saved us. They gave us our son back with Jack thriving from day one.  Within two weeks his words had started, with the staff recording down two pages’ worth. Jack smiled again. We started being able to communicate with him and life slowly got better.  His meltdowns all but stopped.  The night terrors left us. We set small goals to start with.  We wanted Jack to say Mum and Dad and it was tears of sheer joy when we first heard those words.  Then Jack’s sibling wanted him to say their names and well, he did. He also said “I love you”.  Every goal we have set for Jack, he has worked so hard and his achieved them all.

Jack has been with AEIOU for 20 months and has achieved so much.  He is now talking in short sentences, plays with his peers and his siblings, tolerates wearing shoes and socks, tracksuits and long sleeve shirts.  Jack eats a proper breakfast and lunch. He can cope with outings and loves to go to the shops.  These things would never have happened without the hard work of the team at AEIOU Toowoomba, and their care, love and support of our whole family.  We can never thank them enough for the exciting future they have given Jack, especially now, as he has started at a mainstream kindergarten during his pre-school year.   This letter is for all who have helped Jack, so when you are having a bad day, and don’t think you are making a difference, you can know you saved not only a child but his whole family.